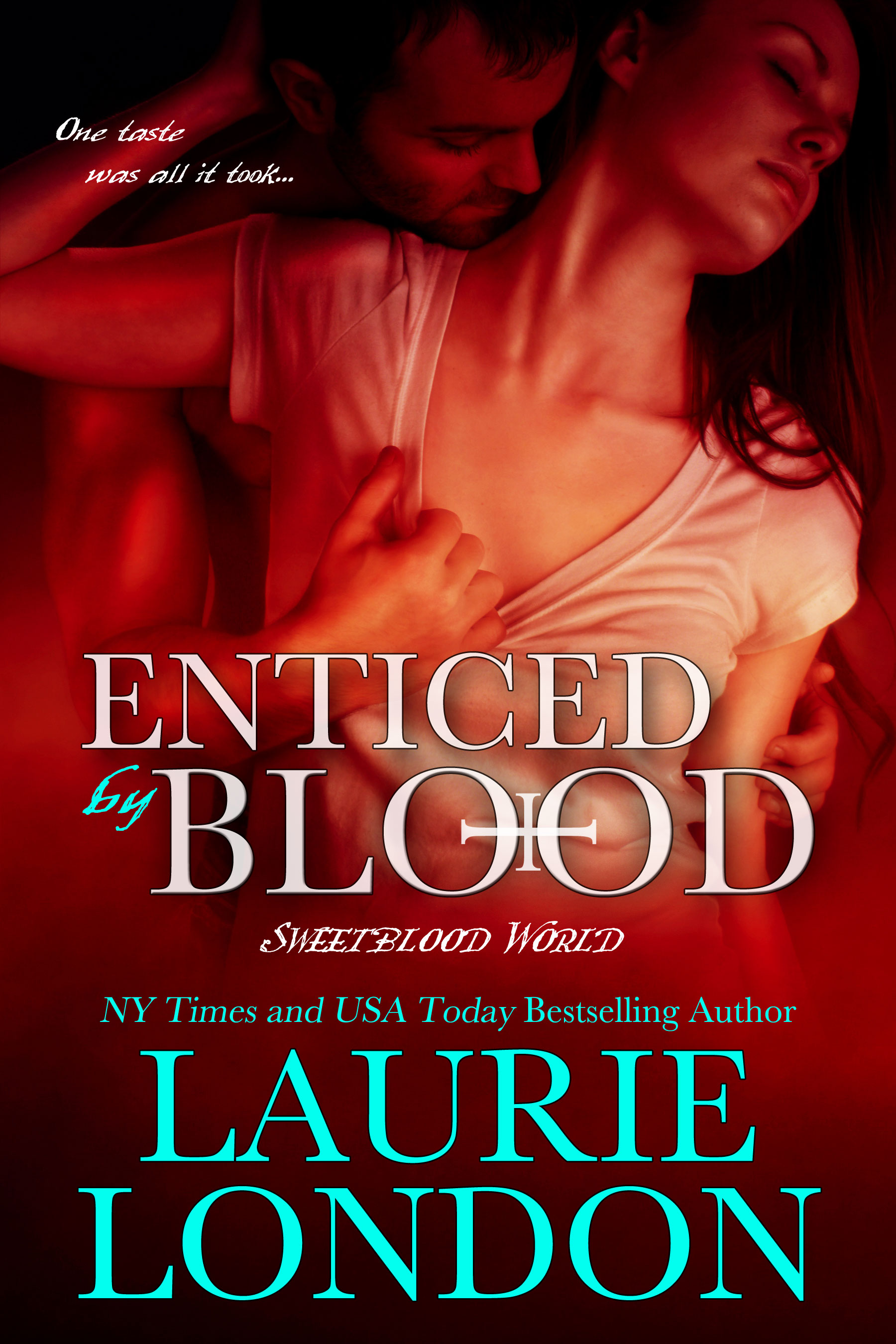 Stockbroker Juliette Bishop gets more than she bargained for when she flies to New Orleans to handle a business matter for her ailing father and comes face to face with her former lover, the handsome, yet mysterious Andre Lescarbeau.

* Originally published in the Mammoth Book of Southern Gothic Romance

“I couldn’t put this book down till I got to the end of the story. I love the Sweetblood series.” ~ Misty, Amazon Reviewer

“I’ve loved Laurie London’s Sweet Blood series from the very beginning and this little novella is just a peek into her vampire world. If you haven’t read any of her other books, you shouldn’t be lost in this. She makes sure there’s a bit of everything from her sexy vampire world and plenty to tease you into wanting more.“ ~ Mandy, Amazon Reviewer

“Though the book was short, I have to say not only was it well written, but it was also HOT. Every element needed in a great romance/erotic novel had a place. Even for a novella, I didn’t feel the story was rushed. There was enough information to tie the story together and make it a book that I didn’t want to put down. I love the Sweet Blood series and this novella only adds to my want to continue to read the series. All in all I found this novella to be HOT and well worth the read!“ ~ Heather, Amazon Reviewer

Juliette Bishop wished she could turn around and go home. Although New Orleans was a beautiful city, it was the last place on earth she wanted to be.

She stepped through the wrought iron gates of the restaurant courtyard, where twisted branches from several trees formed a canopy overhead. If her hands weren’t full, she’d brush a wisp of hair out of her eyes. She tried blowing it away, but the strand clung stubbornly to her damp skin.

After her flight, she’d had just enough time to shower at the hotel, change and take a taxi to the French Quarter. Little good that did, because the back of her silk tank felt as if it were already covered in sweat. The locals were probably used to this humidity, but by San Francisco standards, it was almost unbearable.

She glanced around. Only a few tables in the courtyard between the two buildings were occupied. Maybe there were more people inside.

With a heavy portfolio in one hand and a handbag in the other, she headed toward the hostess station. The brick footing was uneven, so she had to walk on her tiptoes to avoid catching a heel.

“Welcome,” said a young woman with sleek black hair. “Will you be joining us for dinner?”

Nodding, Juliette set her things on a nearby chair, relieved to be rid of the weight for a moment. “I’m meeting someone, but I’m a little early. I doubt he’s here yet.”

She pictured herself sitting inside an air-conditioned bar for fifteen or twenty minutes, sipping a tall cool drink. One with an umbrella and lots of ice. That would give her time to cool down and collect her thoughts.

Under her breath, she cursed her father’s alcoholic business partner for putting her in this situation. If it hadn’t been for Henry’s drinking problem, she wouldn’t be here right now, taking time off from her job at the brokerage firm, trying to salvage her father’s biggest customer—her former lover. A man she despised.

She’d met Andre Lescarbeau last New Year’s Eve in San Francisco. Fueled by one too many peach bellinis and his delicious French accent, she soon found herself in his hotel suite having the best sex of her life. He was dominant and demanding, and although she considered herself a strong, confident woman, she’d willingly submitted to him.

He wouldn’t let her take any time off from work, insisting that he had important business matters to attend to during the day. But every evening like clockwork, when she stepped out of her building on Market Street, there he was, waiting for her at the curb in his vintage Aston Martin convertible. How he managed the parking mojo night after night was beyond her.

Andre had asked about her family, so she told him what her father did and all the awards his vintage woodworking company had won, including the articles in Architectural Digest, Traditional Home, and Southern Living. Unbeknownst to her, Andre later contacted her father to do some work for him. He’d inherited a string of old boutique hotels in the South—New Orleans, Mobile, Savannah, Charleston—and was planning to renovate all of them one-by-one.

But one night, without warning, Andre wasn’t waiting for her. She tried reaching him, but he didn’t answer her calls or texts. Worried that something bad had happened to him, she finally went to his hotel, where someone at the front desk remembered he’d left for the airport at dusk with a beautiful young woman in tow. His wife.

It felt as if she’d been punched in the gut. She’d been having sex with a married man. Had actually been falling for him. No wonder he’d been so secretive, sharing little about his personal life. She wasted no time erasing his name from her contacts and vowed never to be so gullible or naive again.

But here she was, less than a year later, getting ready to meet with him.

She had to forget their past. Shove it behind her and do what she needed to do—convince Andre not to cancel his contract. A contract big enough that it would secure her father’s retirement.

If her father hadn’t taken ill, he’d have flown down and handled things himself, so when he asked her to take his place and smooth things over, what could she say? Tell him to send his alcoholic business partner? Or that she couldn’t because she’d banged the customer, a married man who had lied to her?

So she’d sucked up her pride said yes.

“Let me check for you,” the hostess said, jerking Juliette’s thoughts back to the present. “What is the name on the reservation?”

Juliette lifted her hair, hoping a cool breeze would be kind enough to find its way to the back of her neck, but the air was stagnant. “Andre Lescarbeau.”

The woman looked up without consulting the book. “Mr. Lescarbeau?”

“You know him?” Juliette asked. He must come here a lot.

“He owns Cafe Sur La Rue. Would you like to wait in the bar for him? I’ll have Jeffrey grab your things.”

He owns this place?

Juliette glanced around again. Tiny lights were strung in the overhead branches of the courtyard and twinkled against the dark sky. The wrought iron gates and railings were exquisitely ornate. The atmosphere was dripping with Old World charm. Just like Andre.

Had he chosen his restaurant because he wanted to seduce her again on his turf? Well, she was smarter now. And much more informed. She wouldn’t sleep with him again if he were the last human male on the planet.

The sound slid down her spine like melted chocolate. She’d told herself she wouldn’t let him affect her like this.

Remember. He’s married. You’re only here because Dad asked you.

Taking a deep breath, she turned to face him and her heart nearly stopped. Although she hadn’t forgotten how hot he was, time had a way of blurring the specifics.

His dark hair was tousled and he had a slight scruff on his jaw, making him look as if he’d just rolled out of bed. He wore a Mad Men inspired light gray suit, impeccably tailored to accentuate his broad, powerful shoulders and narrow waist. With no tie and camel-colored Italian shoes, he had an air of casual elegance. A man like him would be equally at home dining in the fanciest hotels or walking between rows of grapevines in a vineyard.

“Andre,” she said, curtly, trying to ignore the urge to offer him her hand.

She didn’t want to make any physical contact with him. There’d been something strangely magical about his touch, so she needed to avoid it at all costs.

“Will your wife be joining us?”