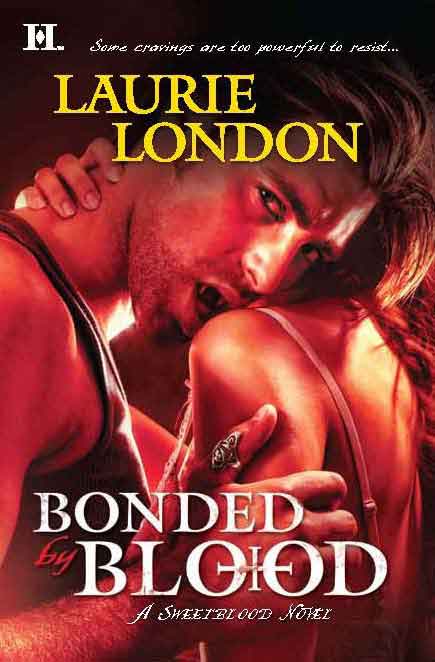 Some cravings are too powerful to resist…

Movie location scout Mackenzie Foster-Shaw has always known that she’s cursed to die young. No one can protect her from the evil that has stalked her family for generations—vampires who crave her rare blood type. Until one afternoon in a wooded cemetery, she encounters an impossibly sexy stranger, a man she must trust with her life.

For Dominic, a man haunted by loss, Mackenzie satisfies a primal hunger that torments him—and the bond they share goes beyond heat, beyond love. She alone can supply the strength he needs to claim his revenge. But in doing so, he could destroy her…

“Calling all Vampire and PNR romance fans out there: This book is a must read. Lara Adrian’s Midnight breed and Jeaniene Frost’s Night Huntress World fans will  appreciate Bonded by Blood!!” –Nocturnal Bites

“If Twilight was written for girls, Bonded By Blood is written for women…Paranormal romance fans will love this new series, and like me, eagerly await the next Sweetblood installment.” –All Things Urban Fantasy

“Bonded by Blood is wicked cool. It’s a dark thriller with a sexy romantic side.” –Joyfully Reviewed

Mackenzie Foster-Shaw spotted the cemetery sign at the last minute and squeezed the brakes, spinning out her white Triumph motorcycle in a spray of dirt and gravel. She meant to lean into a sharp, controlled turn, but the back tire lost traction and she almost had to lay the thing down.

Crap, the rocks hadn’t looked that loose. Irritation at her carelessness momentarily replaced the uncertainty riding in with her as she sprang from the bike. After examining the chrome for chips and seeing no damage, she felt the hard lump of anticipation return, but she swallowed and tried to ignore it.

She yanked off her helmet and squinted into the shadowed interior of the cemetery. Even in the late afternoon sun, little light penetrated the heavy canopy of fir trees.

“I’m liking this so far,” she said to herself as she tossed her sunglasses on the seat. But she knew better than to get her hopes up too soon. Hope didn’t pay the bills, nor did wishful thinking.

Situated on a forest access road, miles from the main highway, the cemetery was certainly ancient enough. The county register listed it as one of the oldest in the region. How long had it been since anyone visited this place? Ages ago, probably.

She started to unzip her leather jacket, then hesitated. Like most people in the Pacific Northwest after months of gray skies and the unending wetness of winter, she didn’t need much of an excuse to strip off the layers. But with one glance at the bushes she’d need to traipse through, she zipped it back up. Those vivid green leaves couldn’t camouflage the barb-covered vines eager to hook anything within reach. Especially bare skin. Besides, it was probably cooler and wetter inside the trees.

She grabbed her camera from the saddlebag and fiddled with the settings, not bothering with the flash attachment. The client was adamant the pictures needed to portray the ambient lighting and convey an oppressive, haunted feeling.

“Hopefully, this location will work for them.” It was the fourth or fifth graveyard she’d visited in the past two weeks. If it didn’t, she was screwed because she was totally out of ideas.

Bear Creek Pioneer Cemetery was etched in once-white paint on a crooked sign at the side of the road. After shooting a few pictures, she scanned the area for a pathway and noticed a slight indentation in the underbrush. She’d do her sketches and take measurements of the road later.

Her boots crunched on the gravel as she slung the camera strap over her shoulder and plunged into the blackberry bushes. Good thing she’d kept her riding leathers on. Both the jacket and the pants. Sharp thorns and stickers grabbed hungrily at her arms and legs, but they weren’t able to gain purchase on the thick hide.

As she stepped into the small clearing, the still, dank air clung to her face. Tufts of tangled grasses crowded around the crumbling headstones in the middle of the cemetery, but at the edge, the bushes covered them completely. Oppressive? Most definitely. Her stomach lurched with excitement, but again, she quickly tamped it down and got to work.

Opening the tripod, she balanced it on the uneven ground next to a stone cross. Something about it made her hesitate. The name was no longer legible and she paused to run a finger over the weathered, rough surface. Who was buried here, gone and forgotten? A man? A woman? A child?

She must have stared a little too long because her sinuses began to itch. She wrinkled her nose, tried to sniff away the sudden heavy weight pulling at her heart, but it didn’t quite work. Would someone wonder about her too? What she looked like. What kind of a person she was. How long from now? Months? Years, maybe? If she were lucky. But the thing was, there’d be no body in her grave.

Stop. Just stop it. Quit being so damn morbid. Normally she was pretty good at not thinking much about the future. Why worry about something completely out of her control? It had to be all these depressing cemeteries she’d been visiting lately.

She took a deep breath to change the unproductive air in her lungs, screwed the camera in place and exhaled, wrenching her mind back to the present where it needed to stay.

With every satisfying click of the shutter, the outside world became only what she could see through the viewfinder. The gravestones, the trees and the quiet loneliness.

When she finally stopped to examine the results, her pulse jumped like it always did when she captured something magical through the lens. They were good. Really good. Much better than the other locations. When she got to one particular image, she hesitated. The lengthening shadows stretched out over the headstones and mounds of grass like the distorted, tortured lines of Munch’s painting, The Scream, and her spine prickled.

Or maybe it was the wind.

A slight breeze found its way into the open collar of her jacket, tickling her neck and ears, and stirring the branches of the watchful trees. She shivered and brushed her hair away from the lens.

Zombies? Dead eyes and insatiable cravings? She could totally visualize rotting hands stretching out of their graves here. Would Hollywood think so? That was the fifteen hundred dollar bonus question.

She twisted her hair up, clipped it off her neck, and dropped to the forest floor. Although it hadn’t rained, moisture lingered everywhere and the ground smelled woodsy beneath her. She rolled over onto her back, again thankful she’d decided to keep the jacket on. A few wispy fronds of grass brushed her cheek and she batted them away. Twisting the lens to focus on the treetops, she—

A sound sliced through the silence of the graveyard and she froze.

She patted her jacket pocket and felt the reassuring weight of her handgun.

Maybe it was just the squeak of tree limbs protesting against the wind. Of course it was.

With shaking hands, she pushed herself to a sitting position just to make sure. When she heard it again, she scrambled to her feet.

An animal. Definitely not a tree limb.

She held her breath and fixated on the spot at the edge of the cemetery where the noise originated.

A mound of leaves and branches moved. Twenty feet or so in front of her.

Her pulse thundered behind her eardrums. It was probably just a raccoon. But didn’t they hiss? She took a step backwards, her gaze unwavering.

A badger? They were mean sons of bitches. No, this definitely didn’t sound like the one that crawled into their tent on the last camping trip with her father all those years ago. This sounded bigger, different.

Her breath came out in shallow bursts as she glanced behind her. Okay. Her bike was about thirty steps away then up that slight embankment through the sticker bushes. If she ran, would the thing chase her? If she moved slowly, would it even follow? No, it was probably even more scared of her. She eased the camera strap around her neck and—

She heard it again.

This time it was unmistakable.

The pile of leaves shuffled, falling away to reveal a man hidden underneath. With a hand outstretched to her, he writhed as if in pain.

A man? What the hell? Here in the middle of nowhere? Should she run for help? Should she walk closer?

Even from this distance, she could see his brow furrowed in agony, his eyes desperate and hollow. He didn’t appear to be in any shape to harm her. Besides, she had her gun.

Recalling her mother’s stern warnings over the years, she paused. This couldn’t have anything to do with her family, could it? Her cousin Stacy’s face flashed in her memory along with the faded one of her father. But this wasn’t the big city, nor was it summer. Two critical elements. Usually.

She placed a cool hand to her throat, the racing tempo of her heart slowed just a little, and she considered her options. Maybe this was his version of “here little girl, help me with my puppy.” Clear out here though? It wasn’t like this place got a lot of foot traffic.

He dropped his arm and his mouth moved silently. God, he really seemed hurt. She had to do something; she couldn’t just leave him.

She pulled out her cell phone, punched 911, and kept a finger above the Send button. Shaking off myriad notions of zombies and cemeteries, she strode forward to the edge of the trees.

The man lay on his back, half-hidden under the leaves and branches, his clothes covered in dirt. Given his disheveled appearance, he looked like a vagrant. But as she raked her eyes over him, she noted his expensive-looking boots and pale blue dress shirt, and he, too, was wearing leather pants. Most definitely not homeless.

Torn and muddy, his shirt was unbuttoned, ripped open actually, revealing a dirt-smeared but well-defined chest. Some of his shoulder-length dark hair, tangled with bits of leaves and debris, seemed to be partially captured in a ponytail, but she couldn’t be sure from this angle. His eyes, an electrifying shade of ice blue, pierced through her. She stopped a few feet away.

“What happened to you? Are you hurt?”

“I need…your help.” His voice, slightly accented, was clearly laced with pain.

At that moment, the wind picked up and swirled at her feet as if urging her to move. The leaves around him danced on the air and settled slowly back to the ground. Stepping closer, she heard his sharp intake of breath. His eyes widened at first then narrowed to slits, and he shrank backwards into the leaves.

He couldn’t be scared of her, could he? He was a tall man, athletic and powerfully built. Why would he be afraid of her?

“Stay away,” he ordered. Given his condition, his forceful tone surprised her.

She didn’t understand. Why the sudden turnabout? He clearly needed her help. He had to be hallucinating. How long had he been here anyway? Squatting down to appear less intimidating, she tucked her phone in her pocket and stretched out her hands like she would to a frightened dog. “It’s okay. I won’t hurt you. I can help.”

Then she saw it. A hole in his mud-encrusted shirt. She hadn’t noticed it right away because it was fairly small, the size of a quarter maybe, and he cradled his arm as if it were injured.

“Oh my God. Is that…blood? Have you been shot?”

As she sprang to his side, the last thing she remembered was the way his pupils suddenly dilated. Like a shark rolling back its eyes when it bites.